Arad Fort (Arabic: قلعة عراد, Qal'at 'Arad) is a 15th-century fort in Arad, Bahrain. Formerly guarding a separate island of its own, the fort and its surroundings have since been joined to Muharraq Island. Arad Fort was built in the typical style of Islamic forts during the 15th century before the Portuguese invasion of Bahrain in AD 1622. This fort has a beautiful history. A few feuds between the Islamic divisions of Bahrain have taken place here. This fort is one of the compact defensive forts in Bahrain. In its present location, it overlooks various sea passages of Muharraq's shallow seashores. In the past, there was an inaccessible marine channel which was controlled by the local people to prevent ships from breaking through to the island where the fort is located. 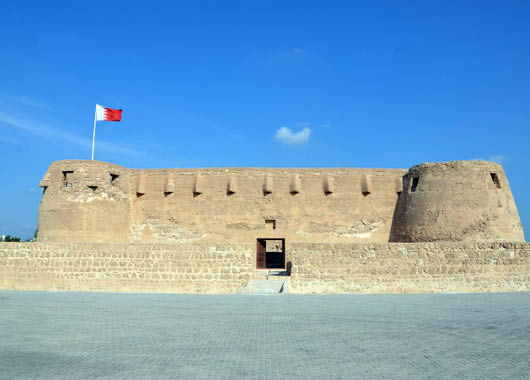 The fort is square and on every corner there is a cylindrical tower. It is surrounded by a small trench which used to be filled with water from wells that were drilled especially for this purpose. In every corner of the upper wall of the fort there are nose shaped openings for marksmen. Close to the Bahrain International Airport, the fort has been extensively restored and is illuminated at night.

Traditional materials have been used in the restoration and maintenance of the fort after making extensive analysis of the original materials such as sea stones, lime, sand, and palm trunks. See Walls, Archibald G., Senior Architect, Ministry of Information, State of Bahrain, Arad Fort: Its restoration, its history and defences, February 1987, Pub. Directorate of Tourism and Archaeology, Ministry of Information, State of Bahrain. No cement or any other materials which are not in harmony with the historical building or which reduce its historical value have been used. Arad Fort is one of Bahrain's most important fortified castles.

The Fort was built in the style of Islamic forts at the end of the 15th and early 16th centuries. It is recorded in the Portuguese map, Demonstracao da Ilha de Baren, circa 1635, the significant details being, that the fort is under siege by the Portuguese, and that it had outer and inner fortified walls. Due to its strategic location overlooking various sea passages of Muharraq Island, Arad Fort was used as a defensive fortress throughout history, from the time Bahrain was occupied by the Portuguese in the 16th century to the reign of Shaikh Salman Bin Ahmed Al-Khalifa in the 19th century. Arad Fort was most recently restored between 1984 and 1987, under the direction of the Historic Buildings and Conservation Architect, Dr Archie Walls.

Little is known of the fort's history, and there is no firm evidence of the precise date of construction, but comprehensive excavations have been undertaken in order to discover its past. The Fort's construction follows the 'layered technique' identified by Dr Walls in the mid 1970s, a technique whose origins are in mud brick constructions, see Walls, Archie G., op. cit. and Walls, A.G., Arabian Mud Brick Technology: Some Thoughts after the Bam Earthquake, Construction and History Society Newsletter, No. 69, July 2004, pp. 11–19. The fort is open for a fee. Arad Fort was built in the typical style of Islamic forts during the 15th century before the Portuguese invasion of Bahrain. 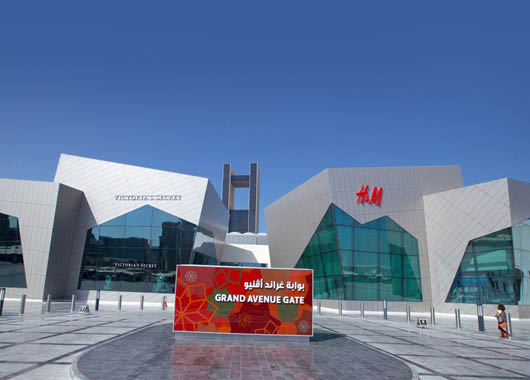 The Avenues - Bahrain is the first shopping & Leisure destination of its kind in the Kingdom of Bahrain. 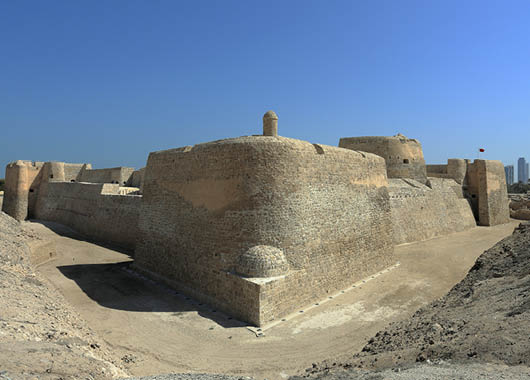 The Qal'at al-Bahrain (Arabic: قلعة البحرين; Portuguese: Forte de Barém), also known as the Bahrain Fort or Portuguese Fort, is an archaeological site located in Bahrain. Archaeological excavations carried out since 1954 have unearthed antiquities from an artificial mound of 12 m (39 ft) height containing seven stratified layers, created by various occupants from 2300 BC up to the 18th century, including Kassites, Greeks, Portuguese and Persians. It was once the capital of the Dilmun civilization and was inscribed as a UNESCO World Heritage Site in 2005. The fort and the tell Qal'at al-Bahrain is built on, are located on the Bahrain island, on the northern seashore. On a clear day it is also seen from Saar. It stands like a "sentinel" near Manama, the capital of Bahrain; it is 6 km (4 mi) away from Manama on the fertile north coast. The tell is the largest in the Persian Gulf region and was built close to the port and by reclamation of seashore land. The archaeological findings, which are unearthed in the fort,reveal much about the history of the country. The area is thought to have been occupied for about 5000 years and contains a valuable insight into the Copper and Bronze Ages of Bahrain.